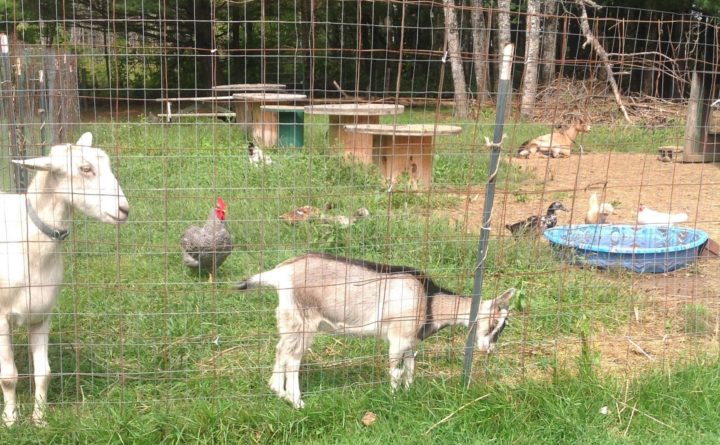 A small collection of chickens, ducks and goats live on Lloyd Cowan’s small, backyard farm in Madison. He is worried about the future of his critters in the wake of the town’s new ordinance banning most livestock and poultry on lots smaller than an acre and a half. Town officials are hoping to reach a compromise with small landowners.

Lloyd Cowan is not sure what he’s going to do with his small flock of chickens, two ducks and three goats.

He lives in the small town of Madison, population 4,700, where urban farming was permitted until the town abruptly passed an ordinance banning it at the June 11 annual town meeting. The new law didn’t grandfather residents like Cowan, who’ve raised animals in their backyard for decades.

The Madison “backyard” farmer said he is among those caught up by the newly passed town ordinance banning any livestock — including horses, donkeys, cattle, oxen, goats, sheep, llamas, pigs, emu, ostrich, turkey, ducks geese and roosters — on lots 1.5 acres or smaller.

The ordinance also limits those landowners to no more than 12 chickens and/or 12 rabbits. It was passed at a town meeting earlier this month and does not exempt or “grandfather” current holders of livestock living on small parcels.

It passed by a simple majority with a show of hands among the 65 residents in attendance at the meeting, according to Tim Curtis, town manager.

Curtis said he is unsure exactly how many Madison residents are impacted by the new ordinance.

“We don’t have a number,” he said. “We never really went into that level of detail in looking at it.”

Hoping to reach a compromise on the ordinance, Curtis said he and the selectboard are seeking input from the Maine Farm Bureau and the Maine Department of Agriculture, Conservation and Forestry on possible re-wording.

“The Maine Farm Bureau is always available to work with municipal officials to resolve concerns about farms in their towns without resorting to ordinances that, oftentimes, have unintended and negative consequences,” Julie Ann Smith, executive director of the Farm Bureau, said. “Ordinances can unintentionally create burdensome restrictions for farmers. Farmers put food on our plates, and it is in everyone’s best interest to support the growth of agriculture in Maine.”

Cowan’s flock includes 22 laying and show hens, a very friendly Polish Chicken who likes to visit the neighbors for treats and his two beloved 8-year-old Indian Runner Ducks. When he has a surplus of eggs, Cowan sells them to friends and family. He also shows his prize birds at county fairs.

“I ordered some new chicks this spring, and now I am in violation of this new ordinance because I still had 10 layers from last year,” he said. “I have three goats. We use the milk to make soap, cheese and yogurt. Under the new ordinance we are not allowed to do that anymore. Nobody was grandfathered in.”

Cowan said he finds the move by the town in direct conflict with its vote earlier this year to declare itself food sovereign.

“We did not intend to do anything to harm or be anti-farming,” Curtis said. “Over the last several years the Madison Select Board has worked hard to enact ordinances that balance property rights and property values. The ordinance passed at the town meeting was the result of two years of work with much of the focus on property maintenance.”

This past spring Madison resident Ann Harsh sent her three beef cows off to slaughter, and while she is unsure if the family would raise beef again next year, she feels that choice has now been taken away from her.

“I personally don’t think this ordinance is right,” Harsh, who lives and raised her animals on her 1-acre lot, said. “It’s going to make it hard for some people to homestead and raise critters.”

Harsh said she and her family have been on their little piece of land for 22 years and have never heard any complaints from neighbors living nearby.

“For the past 18 years we’ve raised pigs or cows and even had goats at one point,” she said. “There have been no real issues with neighbors and they have been really wonderful.”

Curtis would not specifically identify any one property or if there were any complaints that may have sparked the push for the ordinance.

He also does not see it being in anyway counter to the local food movement or the adopted food sovereignty ordinance in which he said the townspeople declared their right to grow and sell certain local food and food products to each other, free from state regulatory control.

“That [food sovereignty ordinance] has nothing to do with lot size,” Curtis said. “We never intended to do anything that is anti-farming.”

“The food [sovereignty] ordinance clearly states we have the right to raise our own food for ourselves or to sell,” Cowan said. “So on the one hand the town is saying we have this right, but if you are under 1½ acres, we’ll let you have just 12 chickens.”

The new land ordinance also stipulates any shed housing livestock or poultry must be 15 feet away from the property line and 100 feet away from the nearest neighbor’s existing dwelling. With nothing grandfathered in the new ordinance, existing buildings that were permitted in Madison could now be illegal.

“This is going to make it very difficult for people with small lots,” Cowan said.

Cowan also fears the ordinance will have a negative economic impact on the town.

“I’m [calculating] out what I spend with the local farmer who sells me hay,” he said. “If I spend $800 a year and just 10 other small farmers spend that much, that hay farmer is looking at losing up to $8,000 in sales.”

The same goes for what he and other small farmers purchase from the local hardware and feed stores.

“It’s going to eliminate thousands and thousands of dollars that little backyard farmers are currently spending in town,” Cowan said.

Smith said she hopes all parties can work together on this issue.

“There are unique challenges to being an agricultural producer and we always encourage neighbors to talk directly to their farmers,” she said. “It can be difficult to fully understand what is necessary to produce quality food to feed Maine’s families.”

Harsh is hopeful the town can come to some sort of resolution on the ordinance that will benefit those raising animals on small parcels.

“I think this ordinance was probably a bad move for Madison,” she said. “I think it will discourage some people from moving to town [because] people like their animals.”

For his part, Curtis wants the best solution for all involved.

“It was never the Select Board’s intent to harm smalls farms,” Curtis said. “As such, the town will be working with the Maine Farm Bureau and the [Maine Department of Agriculture, Conservation and Forestry] to make any necessary changes to ensure that we have an ordinance that is in the best interest of all our residents.”