For decades, Maine’s horticulture industry grew plants on agricultural land throughout Maine. It performed this task as an industry on the fringe. While licensed and regulated through the Maine Department of Agriculture (now the Department of Agriculture, Conservation and Forestry), horticulture, or the growing of ornamental plants, was not included in the State’s definition of agriculture, especially in regard to the tax benefits of growing agriculture crops. 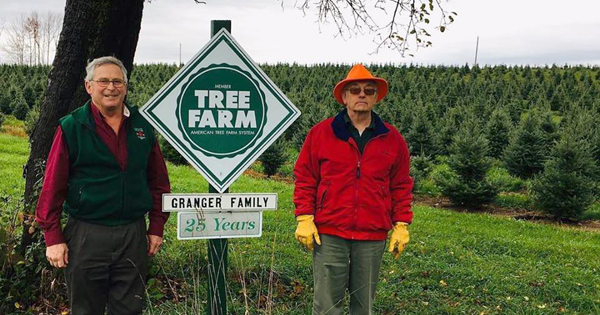 Maine Department of Agriculture, Conservation and Forestry Commissioner, Walt Whitcomb (left), recognizes Clark Granger (right) and Granger Family Farm in China, Maine, for planting, growing and harvesting over 200,000 trees since the 1950s, and donating tress to the Blaine House for the sixth consecutive year.

Each farmer in Maine was allowed a tax break on many of the inputs used in growing, including certain equipment, tools and supplies. Simultaneously, any Maine manufacturing company enjoyed similar tax breaks on their investments needed to make their products, also including machines, tools and supplies. Horticulture was neither defined as agriculture or manufacturing, so, the growing of horticultural crops in Maine did not receive any of the tax brakes given to other growers or manufacturers. Every tool, every pot, every bit of soil and equipment used in horticulture was purchased with sales tax applied, then each horticulture crop produced was taxed at sale…effectively having been taxed already. Simultaneously, every other state in the U.S. recognized horticulture to be a form of agriculture, and offered their horticulture industries the same tax breaks as all other farmers. Maine stood alone in double-taxing horticulture products.

For years, Maine’s horticulture industry would attempt a legislative fix to the problem, and, in every session, the bill would either fail in the Taxation Committee, or would pass the legislature, but be left unfunded by the Appropriations Committee. During one hearing, a greenhouse owner brought her 17-year-old son with her to the hearing and explained that her father had brought her to such a hearing when she was 17; and please fix this before her son had to do the same. When Maine’s horticultural groups all got together and formed the Ornamental Horticulture Council (OHC), the change in definition of agriculture became one of its first important missions. Still, it took years of effort.

The big break happened when John Olson, then Executive Director of the Maine Farm Bureau, attended an OHC meeting with an interesting offer: The Farm Bureau Board of Directors had agreed to a deal whereby the members of the OHC Board would each become individual members of the Maine Farm Bureau, and Mr. Olson would effectively become the lobbyist for Maine’s Horticulture industries. For the next several legislative sessions, OHC members and Jon stood side-by-side speaking to the Legislature in attempts to change Maine’s definition of Agriculture to include horticulture.

In early 2012, Executives of the Maine Landscape and Nursery Association met with Governor LePage’s Financial Officer, Sawin Millett, who had served with distinction in Maine’s Legislature, primarily on the Appropriations Committee. During that meeting, Mr. Millett received a Financial Impact Report showing the size and scope of Maine’s Horticulture industry, including the amount of employed Maine citizens and the need for several thousands more, IF the industry was allowed to grow fairly…the big block being the tax disadvantages because of the statutory Agriculture definition.

The timing of this meeting was fortuitous, because Governor LePage was looking for support in combining the Department of Agriculture and the Department of Conservation and Forestry. To seek out support, the Governor asked to meet with Jon Olson to see if the Maine Farm Bureau would support such a move. Although there were 3 conditions under which the Farm Bureau would support the Governor, one of them was of utmost importance to Maine’s horticulture industry. Mr. Olson demanded a change to the definition of agriculture to include horticulture crops, including the growing of Christmas trees. This was a game-changer for Maine’s Horticulture industry. Because of the MELNA visit as well as the demands from Maine Farm Bureau, the Governor agreed to these terms.

While the Legislature continued to stall any proposed legislation to change the Agriculture definition, the Governor proposed a change in definition within an emergency supplemental budget. This budget, passed in late 2012, was to become law on the first of January, 2014; but, because the State’s annual budget is effective from July 1 on; the effective date of effectiveness began on July 1, 2013. Without the efforts of a very strong and effective Maine Farm Bureau; we could still be waiting for this change to become reality.