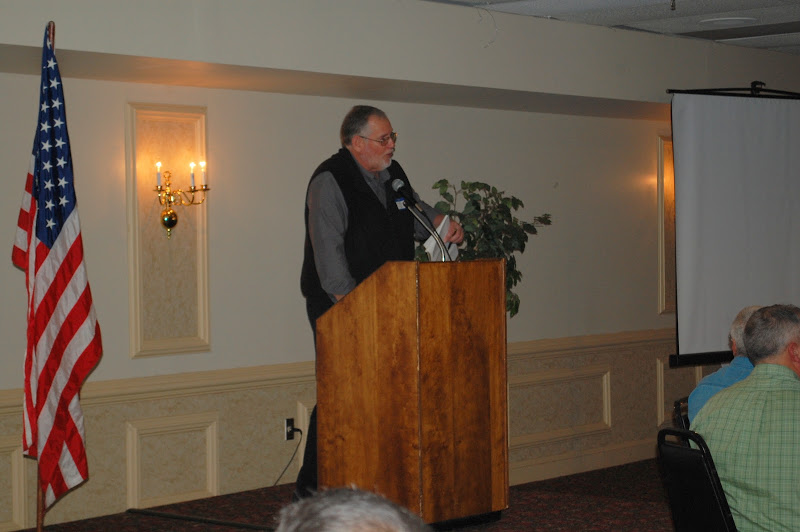 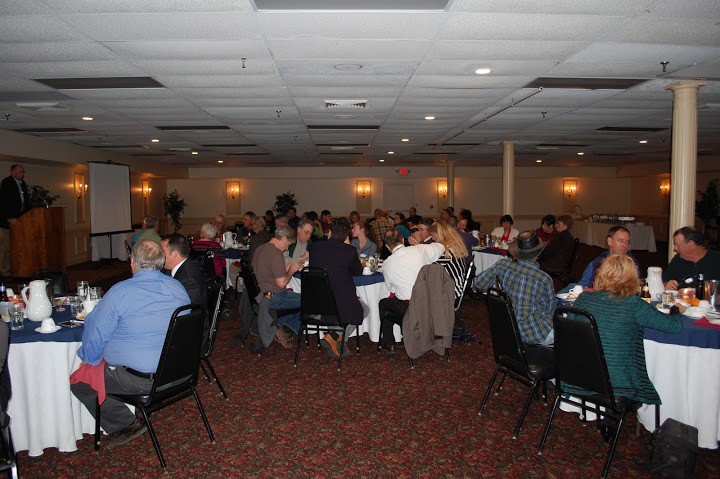 48 Members and Guests Attended the Evening Banquet at the Presque Isle Inn and Convention Center. 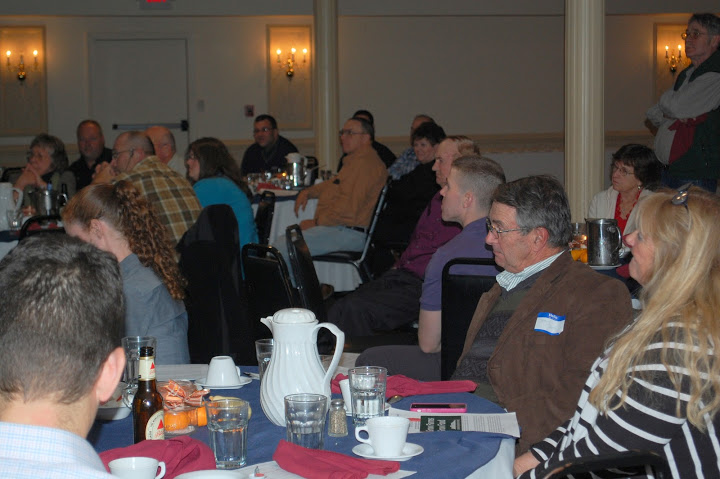 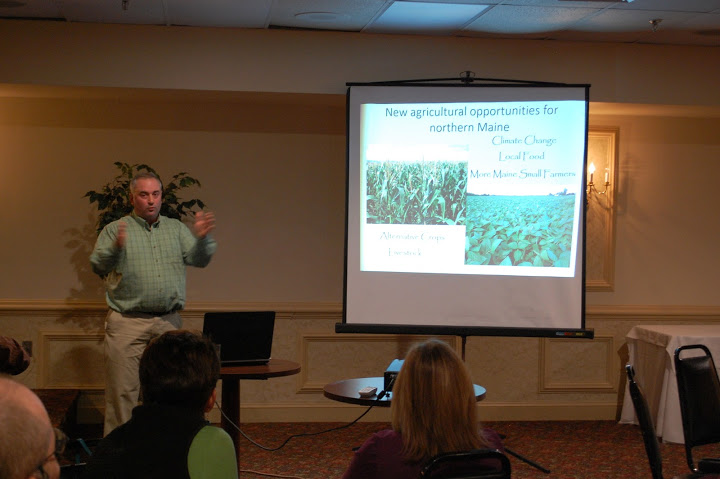 County Farm Bureau Member and UMPI Chair of Arts and Sciences Jason Johnson gives the evening presentation on New Agricultural Opportunities for Northern Maine and the new Sustainable Agricultural Program unfolding at UMPI. A reporter for the Bangor Daily News covered his presentation and wrote this story. 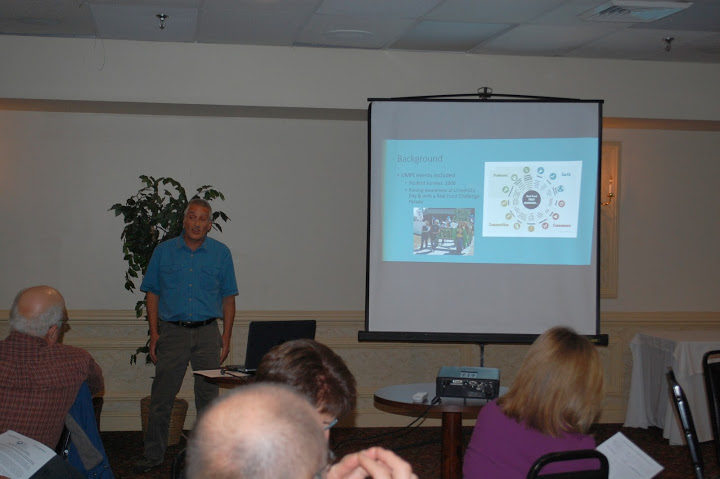 UMPI Assistant Professor of Biology Larry Feinstein gives details on the economic Impact of the local food movement UMPI could have for local farmers. 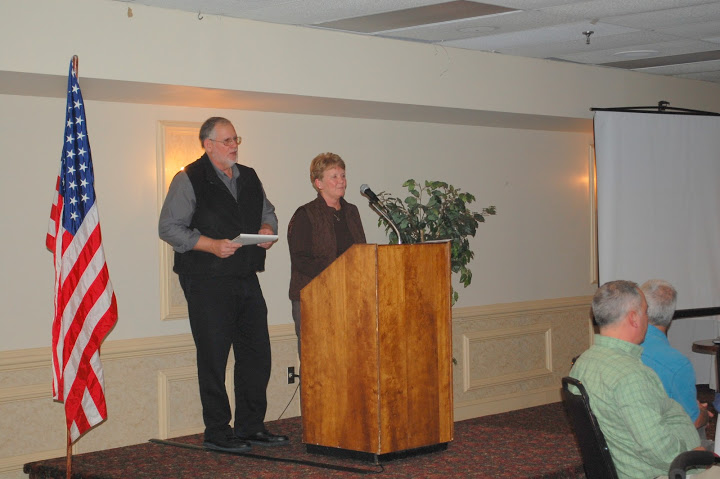 The Maine Potato Board has named the extended Qualey family that operates Three Oaks Farm in Sherman as its 2015 Farm Family of the Year. John and Patty Qualey, and their son Josh, of Sherman, along with Tom and Linda Qualey of Benedicta, are the principle operators on the farm. The 1000-acre family farm  in southern Aroostook, a member of the Maine Farm Bureau,  raises 350 acres of potatoes each year, with the remainder of the cropland in rotations of oats, barley and small grains. The Qualeys, 5th generation Irish immigrants, speak proudly of their late parents, Arthur and Rita, who purchased the “home farm” in 1963, operating a dairy, where they raised their two sons and seven daughters. Their dad sold the dairy cows when the time was right for him, so although brothers Tom and John grew up on a dairy, when they established their farming operation, Three Oak Farms, they were happy to focus on the potato industry. Both Tom and John had attended college in Maine prior to returning to southern Aroostook and, having explored other opportunities, became potato growers. John also established a trucking business, Qualey Ranch, which remains in business today. The Qualeys are happy in their present operations, but see a need for major decisions within the next few years, as retirement grows closer. And Josh has some decisions to make regarding his role with the farm. “I struggle with it,” Josh says. “The risk is big,” agrees his uncle, “but it can be a really good life.” The Qualeys are looking ahead realistically and in a timely manner to where they may be in the next five to ten years. “We need this industry in this state and region,” says Tom. ‘We need to keep it strong, viable and sustainable. Maine’s growers have a great, great geographical advantage with the population of the U.S. northeast within a day’s drive. But we have to adapt and take advantage of our location.” The Qualeys believe the state’s potato industry is sustainable at 50 to 55 thousand acres, but increasing yields is paramount to maintaining the region’s share of the potato industry. “It is critical to increase yields,” says Tom, but as John points out, “It is difficult to maintain consistency with yields, and that’s a challenge. Some years up, some down. So many variables, weather, all we can do is try.” Both John and Tom emphasize the importance of being open and willing to change as an industry grower. “I’ve been doing this for forty years and I’m still learning,” adds John. “If we don’t keep on top of change, whether in markets, new technologies, what have you, it will be the demise of the industry.” The Qualeys grow primarily for the chip industry and sell their crop through Aroostook Produce Distributors (APD). They have tried selling for processing in the central Aroostook area, but geography has Sherman 75 miles south of processing plants. Their father advised them to look south…and so they do. They can’t go north, the brothers point out,as transportation costs make that prohibitive. Tom Qualey has been nationally and regionally involved in the potato industry for many years. He served on the Maine Potato Board for six years, serving two years as chair: 2001 – 2002. In 2004 he was elected to the United States Potato Board, serving for seven years. In 2009 Tom was elected chair of the USPB for a one-year term, and he continues to be involved in regional and national organizations. “This has given me insight on the diversity of our region and also the common goals that we share as an industry,” Tom says. The Qualey family demonstrates the strength of a family organization, the determination to have a successful role in the potato industry, and the realistic vision of the challenges facing a farm family in today’s modern agriculture environment. Tom’s wife Linda is the CEO of a non-profit in the Bangor area, but keeps the farm books and helps out with other farm work as needed. The couple has two daughters, Meagan and Erin, and three granddaughters, who live in Southern Maine and Illinois. John and Patty live on Three Oak Farms with their daughter Katie. Patty is an integral part of the operation who manages, recruits and schedules the crew. Along with Josh, John and Patty also have three other sons, Jimmy, Jason, and Jesse, and six grandchildren who live in Holden, ME, VA, and Iowa. They are excited to welcome a daughter-in-law Sarah and two grandchildren with Josh’s upcoming wedding in August. Three Oak Farms lies peacefully in the shadow of Mount Katahdin in southern Aroostook — not a bad place for Arthur and Rita Qualey to have chosen to raise their nine children —  and provides continuity as their sons and grandson face the industry’s future. “Every day, both as a family and as an industry, we have to put our big-boy boots on and address whatever challenge and opportunity the day brings,” says John. “That’s what successful farmers do.” Thanks to the Maine Potato Board for providing this story on a Maine Farm Bureau member.

This Page is sponsored by